Skip to content
Previous Next
What is a Panic Attack?

What is a Panic Attack?

Over 4 million people in the U.S. experience these thoughts accompanied by a litany of physical symptoms. A panic attack is a sudden, unexpected surge in adrenaline which occurs in the absence of any apparent danger. Our built in fight or flight response is activated for no obvious reason. People who tend to have panic attacks are typically hypersensitive to physical fluctuations in their body. How you perceive these physical symptoms determines your level of anxiety. If you assign catastrophic thoughts like those listed above, you are much more likely to trigger the fight or flight adrenaline release. 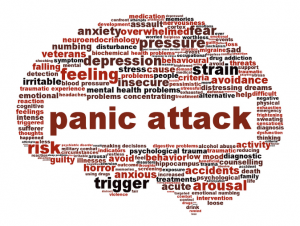 What Causes a panic attack?

Recognizing the signs of a panic attack at the first stages is crucial. Keeping a panic attack log will help you identify what leads up to a full blown attack. A tool box of coping strategies is also important to stop a panic attack at any level of the anxiety scale from 0 (calm) to 10 (major panic attack). More information on how to overcome panic attacks and how to prevent panic attacks is provided in the article “How to Control Panic Attacks.”

Anxiety screening tool based on the GAD-7

This assessment is entirely confidential and the results will be emailed to you.